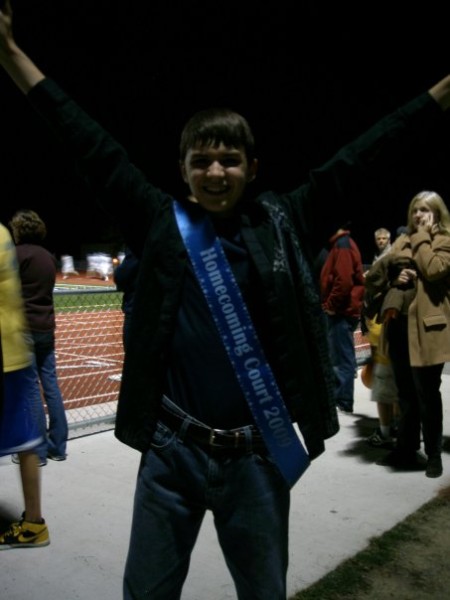 (That woman on the phone and that man peeking out are just strangers. I don’t know them, and that’s okay.)

On the first year of high school, I was first introduced to the peer pressure that’s in high school. Believe it or not, it’s not from the older kids, it’s from my peers at the time.

On the ‘welcome back to school’ assembly, the seniors asked the foreign exchanged students to come down and introduce themselves. Kids around me told me to go down there, but I didn’t know it was for foreign exchanged students, so I went anyways clueless and introduced myself as Tyler and saying that I’m a freshman. I was embarrassed that I didn’t know it was for the other kids, so I went to my seat and looked back at the crowd thinking to myself “This is a small community. This will be fun.”

I thought of that because at the football game, I dressed in dark clothing with a black cowboy hat on. (I was holding it up in the air on this picture, but my hand was cut off.) I was in the shadows and came out yelling “GOOOO!!!!!” and the seniors know exactly what to do and yelled out “SPARTANS!!!” I got people really riled up on the class of 2010 and on the beginning of 2009.

When I did my performance, I became a great star on high school, and the votes kept coming for me being the “Freshman King” for Homecoming Court. It was an amazing feeling being gifted in that kind of way. Most of the thanks goes to the seniors for accepting new surprises like a single Freshman showing no mercy in showing high school spirit.
GO SPARTANS!

His Book on Autism Written from Personal Perspective